Successfully reported this slideshow.
We use your LinkedIn profile and activity data to personalize ads and to show you more relevant ads. You can change your ad preferences anytime.
Analyzing the Biofuel Industry in India 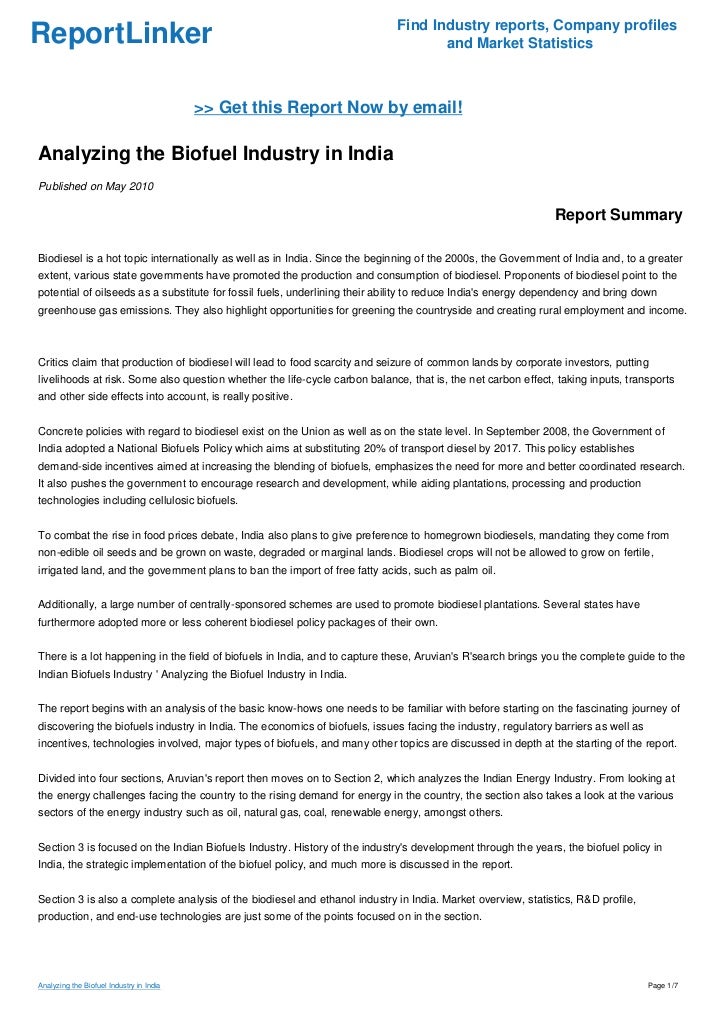 Analyzing the Biofuel Industry in India

Biodiesel is a hot topic internationally as well as in India. Since the beginning of the 2000s, the Government of India and, to a greater extent, various state governments have promoted the production and consumption of biodiesel. Proponents of biodiesel point to the potential of oilseeds as a substitute for fossil fuels, underlining their ability to reduce India's energy dependency and bring down greenhouse gas emissions. They also highlight opportunities for greening the countryside and creating rural employment and income. Critics claim that production of biodiesel will lead to food scarcity and seizure of common lands by corporate investors, putting livelihoods at risk. Some also question whether the life-cycle carbon balance, that is, the net carbon effect, taking inputs, transports and other side effects into account, is really positive.Concrete policies with regard to biodiesel exist on the Union as well as on the state level. In September 2008, the Government of India adopted a National Biofuels Policy which aims at substituting 20% of transport diesel by 2017. This policy establishes demand-side incentives aimed at increasing the blending of biofuels, emphasizes the need for more and better coordinated research. It also pushes the government to encourage research and development, while aiding plantations, processing and production technologies including cellulosic biofuels.To combat the rise in food prices debate, India also plans to give preference to homegrown biodiesels, mandating they come from non-edible oil seeds and be grown on waste, degraded or marginal lands. Biodiesel crops will not be allowed to grow on fertile, irrigated land, and the government plans to ban the import of free fatty acids, such as palm oil. Additionally, a large number of centrally-sponsored schemes are used to promote biodiesel plantations. Several states have furthermore adopted more or less coherent biodiesel policy packages of their own.There is a lot happening in the field of biofuels in India, and to capture these, Aruvian's R'search brings you the complete guide to the Indian Biofuels Industry ' Analyzing the Biofuel Industry in India. The report begins with an analysis of the basic know-hows one needs to be familiar with before starting on the fascinating journey of discovering the biofuels industry in India. The economics of biofuels, issues facing the industry, regulatory barriers as well as incentives, technologies involved, major types of biofuels, and many other topics are discussed in depth at the starting of the report. Divided into four sections, Aruvian's report then moves on to Section 2, which analyzes the Indian Energy Industry. From looking at the energy challenges facing the country to the rising demand for energy in the country, the section also takes a look at the various sectors of the energy industry such as oil, natural gas, coal, renewable energy, amongst others.Section 3 is focused on the Indian Biofuels Industry. History of the industry's development through the years, the biofuel policy in India, the strategic implementation of the biofuel policy, and much more is discussed in the report.Section 3 is also a complete analysis of the biodiesel and ethanol industry in India. Market overview, statistics, R&D profile, production, and end-use technologies are just some of the points focused on in the section. The economics, prices and competitiveness of biodiesel and ethanol in India is also touched upon, along with the benefits of biodiesel and ethanol and the barriers facing the development of biofuels in India.Section 3 also profiles the leading industry players (not many at this point), thus concluding the report.Grab a copy of this report and get up-to-date on A to Z of the Indian Biofuels Industry.

Analyzing the Biofuel Industry in India