Successfully reported this slideshow.
We use your LinkedIn profile and activity data to personalize ads and to show you more relevant ads. You can change your ad preferences anytime.
Market Research Report : Solar photovoltaic market in india 2014 - Sample 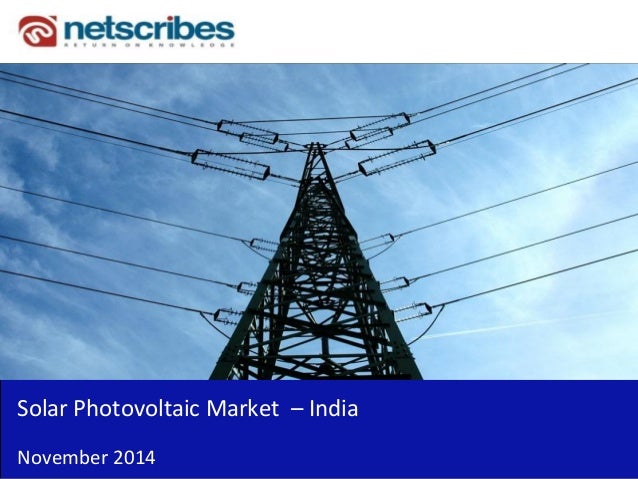 For the complete report, get in touch with us at: info@netscribes.com

Abstract :
Netscribes’ latest market research report titled Solar Photovoltaic Market in India 2014 states that the renewable energy sector is gaining prominence in India. With the country facing a continuous shortfall in the supply of conventional sources required to meet the increasing demand for energy in recent years, the focus is gradually shifting from conventional to renewable sources of energy. In order to reduce the current demand-supply gap for electricity within the country, the renewable energy sector has to be given high importance. With several solar PV projects coming up under the Jawaharlal Nehru National Solar Mission (JNNSM), the demand for PV cells and modules is expected to increase significantly. Moreover, the capital costs involved in setting up solar PV projects in India, along with the feasible geographical location of the country that enables it to receive around 3,000 hours of sunshine each year, makes solar PV a highly viable option for electricity generation. The domestic solar PV industry has also attracted significant investments over the past few years. These factors will ensure that the market continues to exhibit steady future growth.
The Government of India is actively involved in the development of the renewable energy sector. Through its various programs, it has directly and indirectly benefitted the solar PV industry. The market is characterized by high competition among players. Although the import of low cost products from China has had a negative impact on the business of organized players, the market continues to exhibit steady growth which is expected to benefit the industry as a whole.