Successfully reported this slideshow.
We use your LinkedIn profile and activity data to personalize ads and to show you more relevant ads. You can change your ad preferences anytime. 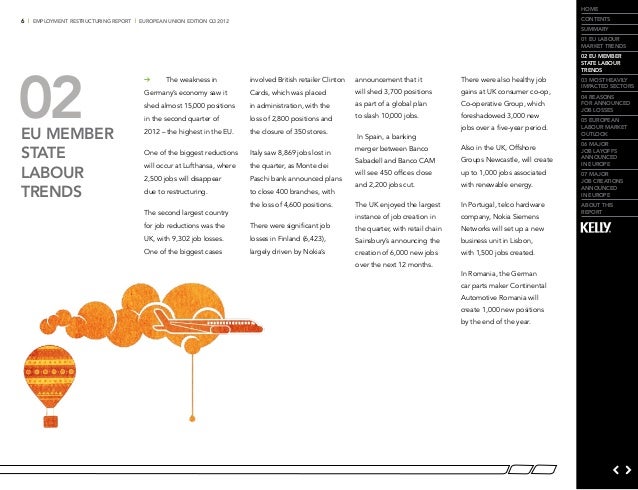 home6 | Employment RestructurinG report | European union edition Q3 2012 contents summary 01 EU Labour market trends 02 EU member state labour02 trends ➔ The weakness in involved British retailer Clinton announcement that it There were also healthy job 03 most heavily impacted sectors Germany’s economy saw it Cards, which was placed will shed 3,700 positions gains at UK consumer co-op, 04 reasons shed almost 15,000 positions in administration, with the as part of a global plan Co-operative Group, which for announced job losses in the second quarter of loss of 2,800 positions and to slash 10,000 jobs. foreshadowed 3,000 new 05 european jobs over a five-year period. labour marketeu member 2012 – the highest in the EU. the closure of 350 stores. In Spain, a banking outlook 06 majorstate One of the biggest reductions Italy saw 8,869 jobs lost in merger between Banco Sabadell and Banco CAM Also in the UK, Offshore Groups Newcastle, will create job layoffs announced in europe will occur at Lufthansa, where the quarter, as Monte deilabour 2,500 jobs will disappear Paschi bank announced plans will see 450 offices close up to 1,000 jobs associated 07 major job creations and 2,200 jobs cut. with renewable energy.trends due to restructuring. to close 400 branches, with announced in europe the loss of 4,600 positions. The UK enjoyed the largest In Portugal, telco hardware about this The second largest country report instance of job creation in company, Nokia Siemens for job reductions was the There were significant job the quarter, with retail chain Networks will set up a new UK, with 9,302 job losses. losses in Finland (6,423), Sainsbury’s announcing the business unit in Lisbon, One of the biggest cases largely driven by Nokia’s creation of 6,000 new jobs with 1,500 jobs created. over the next 12 months. In Romania, the German car parts maker Continental Automotive Romania will create 1,000 new positions by the end of the year.