Successfully reported this slideshow.
We use your LinkedIn profile and activity data to personalize ads and to show you more relevant ads. You can change your ad preferences anytime.
How Volkswagen Mocked Corporate Social Responsibility: “Diesel Gate” Outs Sustainable Business Sham 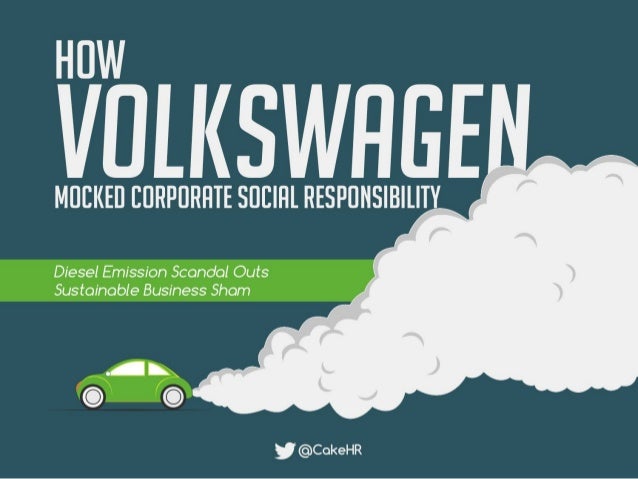 In September 2015, the automotive industry played witness to the largest scandal among its ranks in recent history, as Volkswagen was caught cheating with its pants down. The German car manufacturer had recently overtaken Toyota in sales, in the first half of 2015, to establish itself as the leader of the global car market. Though, this shouldn't have been a surprise to anyone, since VW was largely leading the automotive industry in terms of revenues, profits, and assets even in 2013.

The world was left with jaws agape in early September, as the German giant admitted to placing “cheat” software in roughly 11 million of its diesel-engined cars worldwide. Carried out since 2009 onwards, this subterfuge was perpetrated in an effort to deceive pollutant emissions testing in developed markets like US and EU. As investigations into the fraud continue, the primary reason seems to be that Volkswagen did not wish to install a Urea-based exhaust system marketed as AdBlue – roughly $336 per unit – into the “clean diesel” engines which they'd spent years developing for their 2009 models. In-house testing into the engines revealed that they emitted roughly 35 to 40 times the amount of nitrogen oxide, linked to smog, acid rain, asthma, and other illnesses, above the limits allowed by clean air legislation in developed nations.

Suddenly, the car manufacturer was faced with two options – go back to the drawing board and miss out on the 2009 car season, or spend exorbitant amounts of money to fix the problem by retro-fitting their engines with AdBlue. They chose option three – cheat through a “defeat device” software. Ironically, the test which ultimately uncovered the deception was carried out by independent American researchers – working for an NGO, rather than the EPA or other bigwig agencies – to show their European counterparts that diesel engines can be used with cleaner emissions. Despite their published efforts coming to light in 2014, however, the EPA was unable to make Volkswagen admit to the cheat till September 2015 – after threatening to withhold approval for VW's and Audi's 2016 diesel models.

Now, after having lost its CEO in the wake of the scandal alongwith almost a fifth of its share value, Volkswagen is looking at criminal investigations from the US and Chinese governments, a legal penalty for $18 billion for the roughly 482,000 cars it sold in US, and class-action lawsuits from owners of post-2009 VW Jetta, Golf, Beetle, and Passat, as well as similar Audi diesel models. Even though the firm has set aside roughly $7.3 billion to deal with this scandal, early projections show that this amount may be grossly insufficient.

By now, we're sure that you have a flood of unanswered questions – What are these “defeat devices”? How do they affect the car's performance?