Successfully reported this slideshow.
We use your LinkedIn profile and activity data to personalize ads and to show you more relevant ads. You can change your ad preferences anytime.
libinjection: from SQLi to XSS  by Nick Galbreath 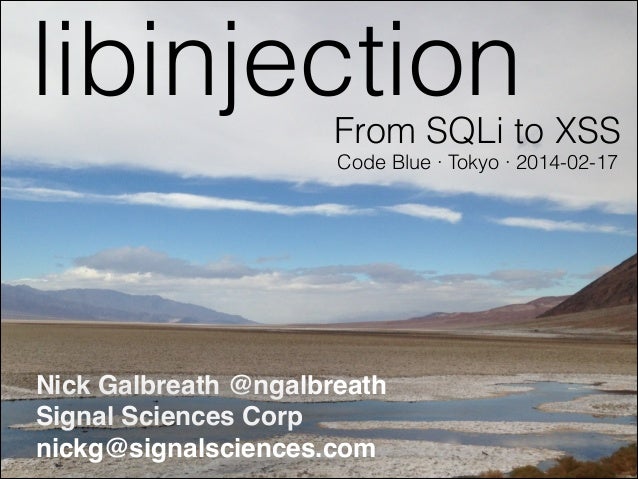 libinjection: from SQLi to XSS  by Nick Galbreath

libinjection was introduced at Black Hat USA 2012 to quickly and accurately detect SQLi attacks from user inputs. Two years later the algorithm has been used by a number of open-source and proprietary WAFs and honeypots. This talk will introduce a new algorithm for detecting XSS. Like the SQLi libinjection algorithm, this does not use regular expressions, is very fast, and has a low false positive rate. Also like the original libinjection algorithm, this is available on GitHub with free license.

Nick Galbreath is Vice President of Engineering at IPONWEB, a world leader in the development of online advertising exchanges. Prior to IPONWEB, his role was Director of Engineering at Etsy, overseeing groups handling security, fraud, security, authentication and other enterprise features. Prior to Etsy, Nick has held leadership positions in number of social and e-commerce companies, including Right Media, UPromise, Friendster, and Open Market. He is the author of ""Cryptography for Internet and Database Applications"" (Wiley). Previous speaking engagements have been at Black Hat, Def Con, DevOpsDays and other OWASP events. He holds a master's degree in mathematics from Boston University and currently resides in Tokyo, Japan.

libinjection: from SQLi to XSS  by Nick Galbreath