Successfully reported this slideshow.
We use your LinkedIn profile and activity data to personalize ads and to show you more relevant ads. You can change your ad preferences anytime.
Path to Ever Green Revolution 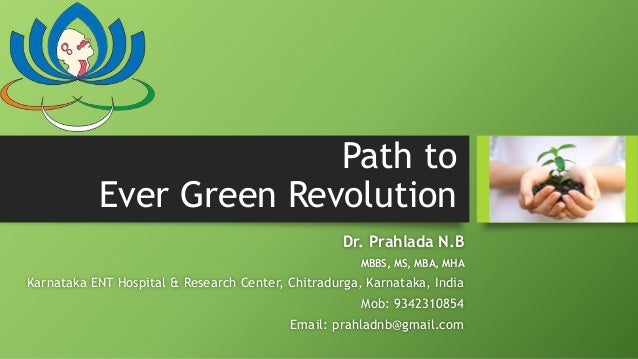 Path to Ever Green Revolution

In the last few decades, India has experienced rapid economic and Agricultural growth, supported by solid increases in crop yields, due to increased cropping intensity and greater area devoted to food crops. India is the top producer of milk, pulses and jute in the world. It ranks second in the production of rice, wheat, sugarcane, groundnut, vegetables, fruit and cotton. India also is a leading producer of spices, fish, poultry, livestock and plantation crops. However, India’s sustained economic development has no significant impact on world markets.
India’s policy effort to support farmers, promote rural development, and at the same time address food insecurity has been, and is now, very significant. A range of supply side programmes such as input subsidies for fertilisers, irrigation, electricity and farm credit, coupled with investments in irrigation, are designed to encourage higher yields and production. A range of market support prices are set to cover costs and improve farmer returns. High food subsidies are given to help poor consumers. In September 2013, India enacted a new National Food Security Act (NFSA), which is now implementing the most ambitious “right to food” programme yet to be applied in history, covering over 800 million people and providing 60 kg of food grain per person each year at prices that are about 10% of current retail prices for food grains.
However, despite its growth, the role of agriculture in India’s economy has been declining sharply as other sectors, particularly services, have grown more quickly. Primary agriculture accounted for about 14% of national gross domestic product (GDP) in 2012, down from close to 30% in 2000. But, while there has been a reduction in the share of agriculture in GDP, a commensurate reduction in its employment share has not taken place. Primary agriculture still employs around half of the Indian population, and it is the main driver of employment in rural areas, where 68% of the population live. Potential yield gaps remain, and concerns about the sustainability of growth in production are mounting. Rural labour costs are rising, water supplies are being depleted and smaller farm sizes due to fragmented land holdings potentially impede the capture of economies of scale. Natural calamities like drought and floods are adding to these woes, creating a severe agrarian crisis in the country with large number of farmers resorting to suicides.
Major concerns have centred on food insecurity in the presence of trade surpluses, and how to invigorate agriculture to promote growth and employment in populous rural communities, where unlike the experience of most countries, the size of average land holdings continues to decline. About one-quarter of the world’s food insecure people are within India, and improving its nutritional status remains a significant challenge.
However, despite the challenges, a big potential for positive Agriculture growth exists in the country with i

Path to Ever Green Revolution