Successfully reported this slideshow.
We use your LinkedIn profile and activity data to personalize ads and to show you more relevant ads. You can change your ad preferences anytime.
Sri Chakra 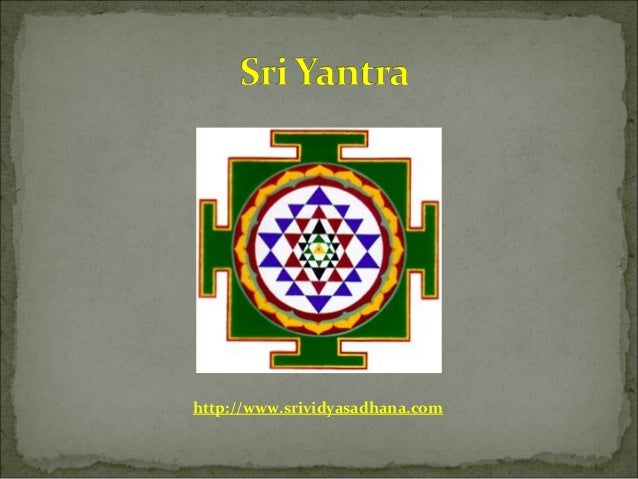 Continue your professional development with Scribd

http://srividyasadhana.com
The Sri Chakra ("holy wheel") is a yantra formed by nine interlocking triangles that surround and radiate out from the central (bindu) point, the junction point between the physical universe and its unmanifest source. It represents the goddess in her form of Shri Lalita Or Tripura Sundari, "the beauty of the three worlds (Heaven, Earth, Hell)". The worship of the Sri Chakra is central to the Shri Vidya system of Hindu worship. Four isosceles triangles with the apices upwards, representing Shiva or the Masculine. Five isosceles triangles with the apices downward, symbolizing female embodiment Shakti. Thus the Sri Yantra also represents the union of Masculine and Feminine Divine. Because it is composed of nine triangles, it is known as the Navayoni Chakra.[1] "These nine triangles are of various sizes and intersect with one another. In the middle is the power point (bindu), visualizing the highest, the invisible, elusive centre from which the entire figure and the cosmos expand. The triangles are enclosed by two rows of (8 and 16) petals, representing the lotus of creation and reproductive vital force. The broken lines of the outer frame denote the figure to be a sanctuary with four openings to the regions of the universe".[2]

Together the nine triangles are interlaced in such a way as to form 43 smaller triangles in a web symbolic of the entire cosmos or a womb symbolic of creation. Together they express Advaita or non-duality. This is surrounded by a lotus of eight petals, a lotus of sixteen petals, and an earth square resembling a temple with four doors.[1]

The Shri Chakra is also known as the nav chakra because it can also be seen as having nine levels. "Nine" comes from "Nau or Nava" of Sanskrit. Each level corresponds to a mudra, a yogini, and a specific form of the deity Tripura Sundari along with her mantra. These levels starting from the outside or bottom layer are:[1]

The Sri Chakra (called the Shri Yantra) is the symbol of Hindu tantra, which is based on the Hindu philosophy of Kashmir Shaivism. The Sri Yantra is the object of devotion in Sri Vidya.

Sri Chakra, popularly mistaken to be a symbol of Lakshmi, is actually a representation of Lalita Mahatripurasundari, an aspect of Parvati Devi.[3] Shri does not mean Wealth in this context. The Shri Chakra is often referred as the Chakra Raja which means King of all Chakra which makes it a supreme instrument in the path of spiritual advancement.